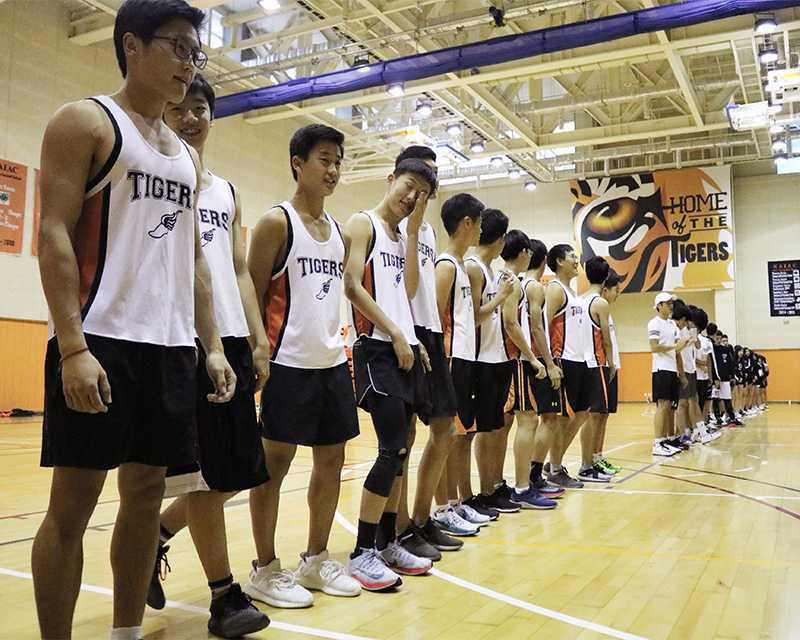 As the banner that says “TIGERS” is torn apart, the Tigers of Seoul International School know that the fall season sports have come to an end. Recently developed as a tradition, Tiger Sports Council hosts a pep rally every season to recognize all respective varsity athletes. This event works to generate stronger Tiger spirit within the school and provide an opportunity for the student body to unite.

The stream of varsity athletes pouring out of the entrance to Tiger Gym 1 kicks the pep rally off to a cheery start. Starting from fierce cross-country runners to determined volleyball players, the athletes make a long line along the gym—and it just seems endless. The number of dedicated athletes astonishes the crowd. Soon after the gym has calmed down, Hojong Shim, the president of Tiger Sports Council, trumpets into the crowd to announce the start of the 2017 Fall Season Pep Rally.

“I remember the sudden burst of cheering that immediately followed the banner ripping,” Amanda Kim (11) said. “As the athletes poured out, the exciting music and the breathless cheering pumped my blood faster and faster. When I saw a classmate of mine that I thought was just quiet dressed in a slick cross-country uniform, I was out of words. If it hadn’t been the pep rally, I would have never known about his talent.”

To heat up the atmosphere even more, D$Q, the official dance club of SIS, performed Blackpink’s “As If It’s Your Last” and Kendrick Lamar’s “Humble”. Starting off with Joyce Kim (11)’s detailed hand gestures, the squad performed a flawless routine that left the audience in awe. Despite the fact that this was their very first performance with a newly selected team, their chemistry was unquestionable.

Due to time constraints, the tennis team had to compete against the volleyball team just after brief moments. Whether it was because of the tiredness or not, the volleyball took the win for the fall season tug of war. Although there were no prizes other than pride, the volleyball team nevertheless jumped around in joy.
“Although it’s repetitive, I love watching the teams play tug of war—I think it’s a perfect demonstration of team unity, strength, and sportsmanship,” Edward Cheong (10) said. “I know that winning this doesn’t mean anything, but I love watching it anyway.”

Although pep rallies happen three times every year, they never gets boring for the student body. With their friends filling the entire gym full of physical and moral support, our Tigers athletes stand before the entire school in professional uniform to proudly represent their school.