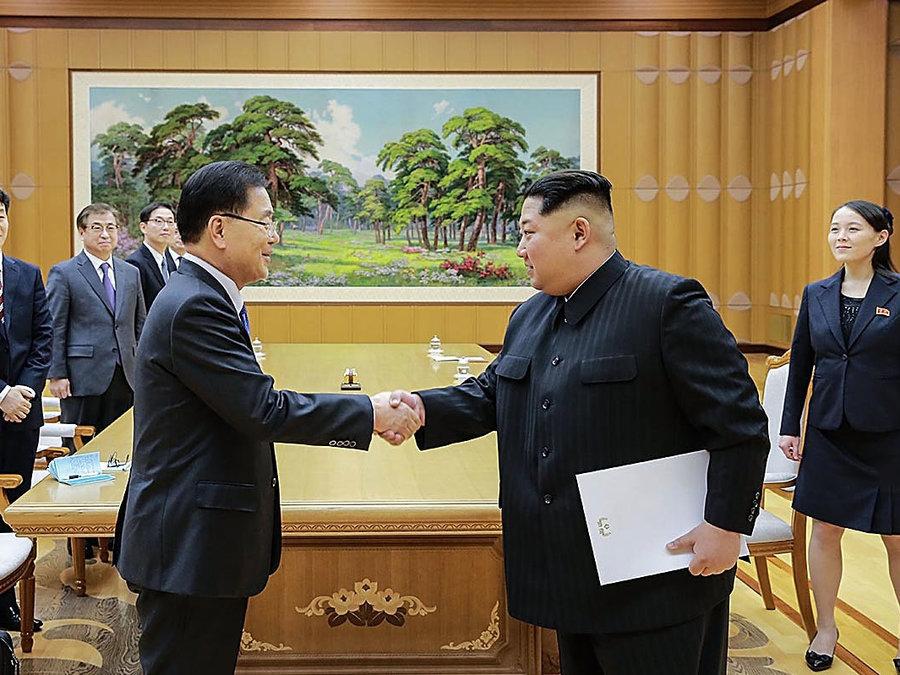 In the wake of the diplomatic respite fostered by the PyeongChang Olympics, further efforts to improve inter-Korean relations have been made by the North and South. With the deployment of envoys to Pyongyang on Mar. 5, the two nations agreed to hold direct talks between their leaders Kim Jong-un and President Moon Jae-in for a rare leaders’ summit in the demilitarized zone next month. The maintenance of such dialogue, combined with the North’s expressed openness to the denuclearization of the Korean peninsula, may signal an opportunity for an enduring inter-Korean rapprochement to be reached.

Under the conditions that the security of its regime is guaranteed, North Korea affirmed its commitment to abandon its nuclear program in a key turn of events. By vowing not to test any ballistic missiles or make further military provocations during talks, the North also extended its hand toward the South’s long-held goal of reducing military tensions between the two nations. Kim even went on to express an “understanding” about the US-South Korean joint military exercises, which the regime had regularly countered as a “vicious challenge to the Korean peninsula.” Further progress was made when North Korea requested dialogue on the topics of denuclearization and the normalization of bilateral ties with the US—an invitation that President Trump accepted in an unexpected outreach of settlements.

Undoubtedly, these events warrant a reaction of guarded optimism. Considering the fact that tensions and the fear of conflict on the Korean peninsula have been soaring high over the past months, which were further fueled by the exchange of belligerent insults and threats between Kim and Trump, the North’s sudden acquiescence to diplomacy comes as a stunning surprise to the international community. Not only that, but the regime’s new composure in multiple areas—encompassing the issues of denuclearization and other military provocations—stands in stark contrast to its original, antagonistic stance taken in the past.

From any onlooker’s perspective, this discrepancy calls forth a valid question that is apposite to the status quo: why the sudden change in attitude?

In recent months, the US-led “maximum pressure” campaign sought to isolate North Korea from the international financial system through the implementation of sanctions, which were coupled with vigorous military maneuvers and hostile threats. The dispatch of renewed sanctions came during the unprecedented sequence of North Korean nuclear and missile tests. According to the NY Times, analysts have speculated that the North Korean economy is beginning to strain under enforced sanctions and prolonged isolation, inducing the regime to resort to negotiation. Predictions also show that Kim’s overture for dialogue may be driven by hopes of mitigating Washington’s threat to use military force

With North Korea having successfully completed major missile tests in recent months, one thing is clear—the call for negotiation comes at an opportune time. That itself is a fact that is hard to deny. But whether such a detour from the regime’s standard route signifies a diplomatic breakthrough or a masked precedent for nuclear regression still stands obscure.

That being said, skepticism for North Korea’s sudden change in approach appears to be justifiable when considering the recursive sequence of actions that North Korea has taken in the past. In fact, the regime’s recent actions seem to restart the familiar cycle of long stagnation followed by a brief period of hope and then a throwback to disappointment for broken promises. As Japan has stated, there is the possibility that North Korea is simply resorting to “smile diplomacy” as sanctions take effect; other observers have also noted the overture to be a stratagem as well. After all, it is true that North Korea has reneged on every deal it has previously signed. Regardless of its intentions, however, the regime has certainly taken a bold step toward diplomacy as of now—an open attempt that may be harder to withdraw this time.

North Korea now treads between the fine line of denuclearization and regression once again. With the groundwork laid for talks on anti-proliferation efforts, a slim window of opportunity sits open, fueling the growth of hope for peace on the Korean peninsula as the clock ticks on. Perhaps history will be repeated. Perhaps it will not. As the sole existent force for determination, only time will tell the fate of the two Koreas.