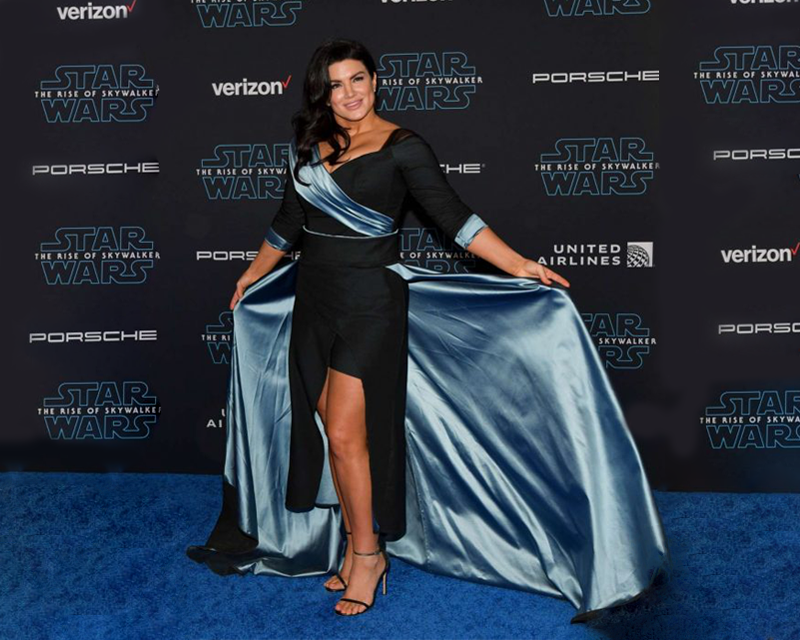 Actress Gina Carano has recently been fired from Lucasfilm following a series of controversial social media posts on her Instagram account. Lucasfilm released an official statement, announcing that she is not with the production company anymore, as they were not in accordance with her “abhorrent and unacceptable” opinions. Under fire for the putative comparison between the status quo concerning divided political entities and the backdrop of the Holocaust, Carano has been ousted for her actions. By comparing these two events, Carano received much hate for the offensive post that was soon deleted. It was not long before her post was screenshotted and shared online. This controversial statement was the last straw before Carano was fired and completely removed from the Disney Plus show, “The Mandalorian.”

“The firing of Gina Carano was extremely unexpected,” said Christopher Lee (11), an avid fan of the television series. “It was disappointing to see that the actress would no longer be seen in future works as she played an unforgettable and prominent role. I have mixed feelings on the incident as a whole though because it is true that the comments may be somewhat controversial to some.”

Carano had already undergone criticism as a result of mishandling insensitive posts, reprimanded by the public for her ignorant actions. For instance, she listed her own pronouns boop/bop/beep to her Twitter username, leading many to accuse her of mocking transgender and non-binary people, although she denies these claims.. Replying to the initial tweet, Carano explained that she was not completely aware of the situation, and concluded her apology statement by stating that although she would not be putting any pronouns herself, she exalts people who decide to do so. Even after her clarification though, her actions were construed by fans who were upset that such a marginalized community was targeted with an outright rejection of pronouns promoting inclusivity. Not only did this event amount to controversy, but she was also condemned for spreading misinformation on wearing masks, and suggested voter fraud. Riling up a big audience, Carano went viral as #FireGinaCarano trended on social media platforms.

“There are always extreme left or right-wing views on these issues,” said Rachel Kim (11), a regular Twitter user. “People always have their own set of opinions. Ultimately, these thoughts led to conflicts and clashes with another political side. While it may be true that Carano did not execute a well-thought-out comment, I do not think that suddenly firing her was justified since Lucasfilm should have given her a warning beforehand.”

Fans were quick to point out an aspect of cancel culture, claiming that Carano was wrongly fired with no substantial justification. Many admit that although Carano had poorly worded her comment, she did not deserve to get fired, as they found nothing wrong with the quote at all. To this end, a petition on “change.org” has been filed to rehire Gina Carano. People claimed that she should be protected by the First Amendment, and others criticized the extent of political correctness. They were upset that empowerment was not encouraged but rather suppressed, and this unanticipated backlash against Disney Plus and Lucasfilm garnered much support as she rapidly regained her social media followers.

“It is quite sad that such a great actress like Gina Carano is being harshly received by the public,” said Rachel Lee (11), a regular film enthusiast. “No longer being able to continue her position as Cara Dune is unfortunate. I was really looking forward to her progress in later episodes, but now I am concerned about how the storyline will proceed.